She grinned as she leaned over the side of the platform and stared at the tiny fish swimming in the sludge that filtered its way under and around their house. Enamored.

She is a glass-half-full kinda gal.

My sandal snapped and the sludge oozed between my toes as I made my way up the planks to get to the box that she was calling home. It was worse than when I had been here during dry season six months ago, to be sure. She wasn\’t living in it at the time but now it was where they were sleeping every night. A single mom and her daughter. I could feel my chest tighten and I held back the tears.

\”My sister is living like this,\” was all I could think.

It is unfair to call it a house really. More appropriately called a platform with slats. Sheets are strategically but futilely placed to cover the open window holes and the larger cracks between the wall boards. Mosquitoes and flies paid no attention as they swarmed right past.

Buckets of water sat in one corner and the single, tiny fan vibrated on the uneven floor where the kids piled on the single mattress to watch the hazy cartoon playing on the small TV screen.

Fortunately it wasn\’t raining because the water nearly flooded the wooden platform each time it did, lifting mosquitoes and raw sewage to closer proximity.

No locks.
No screen to cover the windows.
No bathroom.
No kitchen.

Pricila sat at the plastic table and I could tell she was a little more calloused now. She has been with us for nearly three years at The Donut Company and in that time she has been on quite the roller coaster ride of housing needs and custody battles for her older daughter. To say that women like her are taken advantage of by landlords and the social system would be quite the understatement. So while her living conditions are now far below safe or ideal, after much conversation and council, she felt it better for her to live in a box with no bathroom or running water than to continue to spend half her paycheck paying rent for a puny room with a verbally abusive landlord. That should tell us something.

But if she ever hopes to get custody of her older daughter back from her abusive ex-husband, who is now under a restraining order, she couldn\’t possibly do so in these conditions.

Stuck between the proverbial rock and hard place. Again.

Bea and Sam specifically have walked with her through some deep valleys and while she has grown in many ways, there is a certain hardening that takes place when life\’s injustices keep showing up at your dilapidated from step.

For as determined as she is, she is equally tired.

We helped her purchase this piece of property almost a year ago, though she has only lived in it for about a month, and more confusion ensued when the previous owner tried to take it away. She won that battle but the war is far from over.

Richard walked the perimeter of the house. This was his first time seeing the house in person and he echoed the thoughts of us all: this is not good.

The house is old and built where raw sewage and rain run off from the adjoining neighborhoods, a breeding ground for disease and mosquitoes. We repressed our American savior mode as quickly as it crept its sneaky way to the front of our minds. The initial thoughts of \”she can\’t live here\” and \”we will find her a better place\” were settled and replaced with \”what can we do now with what\’s been given?\”

The reality is, the vast majority of the world lives in similar or worse circumstances and as much as our instinct would tell us to leave this and find better, we realize that is not sustainable. It\’s not a long term solution. It\’s a knee-jerk reaction of the privileged (us) that most often does more harm than good. (Sound strange? Tell me about it. But if there is one thing experience has taught us it\’s there is not always an easy, quick fix to poverty\’s very real battles and most of the time Jesus is found right in the sludge and slime if we swallow our pride long enough to find Him.)

So Richard grabbed the sketch pad and started doing what he does best: trouble-shooting and creating a plan of attack.

We now have a plan in place to rebuild Pricila\’s house. To give it new life. To give her new hope after years of struggle. It\’s a multi-step process that will no doubt be delayed by the rainy season upon us, but it\’s doable.

Jhon and a few guys were already able to build her a walkway to her door so that she no longer has to carry K through the sludge when she takes her to school, goes to work, or gets water. First immediate need met. 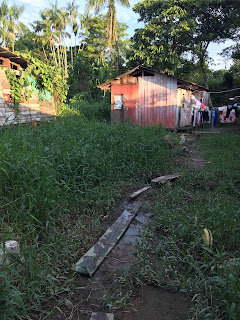 The neighbor has graciously allowed her to use their bathroom for the time being, but we have team arriving next week that plans to build her a bathroom before heading to Benjamin to help build Joice\’s house. Second need tentatively met (pray for no rain that day).

Our ultimate goal it disassemble the house entirely, keep the structural pieces that are still sound, lift the foundation of the house, create a gutter system that will help drain the standing water, and rebuild the home to be secure and enclosed.

We project the cost of this project from start to finish at $5,000US.

We are already praying for the Lord to bring us a team.

\”Aren\’t there locals to do the work?\” you ask. Great question. The simple answer is no. We asked. We\’ve searched. We\’ve had five years of experience to tell us that in this situation, it is more cost effective and timely to get a team to come down and do the work. Of course, our family on the ground will help, too. But we also value the Body coming together to serve in this way.

Will you pray about giving to this need? Would you be interested in coming down to help physically make this happen? We are thinking March/April 2019 after rainy season tapers off.

If you would like to give, here is the link: www.theamazonnetwork.com/give

Let\’s put action to our words and love our sister well.

We believe this will do more than provide a safe, clean home (though that\’s incredibly important). This will also open the door for Pricila to finally get custody of her older daughter, who is in a very vulnerable situation with the father.

Pray. Give. Join us.