Skip to content
I hopped off the back of the mototaxi and peeked my head in the door of Grace House to surprise her. She hugged me tight and kissed my neck, smiling that wide open smile that I remember from three years ago when I first met her. I hugged her right back and told her how good it was to see her. 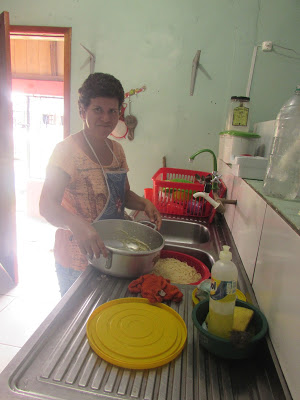 And it really was so good. I watched her as she prepared the food for the kids that day and she worked ever so diligently. She thanked me over and over for the opportunity to be here, in this place, working. “The smiles of these kids keep me going every day. Thank you. Really, thank you.”
I assured her that it was the Lord who had led her here and it was our privilege to welcome her into our family.
Later, as the food was cooking on the stove that would fill the bellies of many of the kids who didn’t have conditions to bring lunches that day, she called me over. She sat in the chair and I sat at her feet and listened intently as she shared with me the last few months of her life.
Her husband had died unexpectedly back in December, the day after Christmas. Her son, Rafael, is the one who discovered his body.
“He had dropped off Rafaela that day at her aunt’s house and told her to go play,” she recounted. “When I went to get Rafaela later, after Rafael had found him, she just started screaming. She kept saying, ‘No! He told me to come here to play! That was someone else! Not him!’ and she just ran back and forth through the house.”
I held back the tears, thinking of Rafael discovering his dad’s body, Rafaela learning of his sudden death, and Carla, left alone to care for her three kids.
But deep down I was confused. I know the rest of the story. How he beat them, sometimes until they couldn’t breathe and other times leaving bruises and cuts as evidence. I knew how he didn’t provide for them and certainly never showed fatherly affection. I\’d seen him passed out on the side of the street, drunk. So… on some level, wasn’t this a relief?
She continued to share with me the depths of their sadness over the last few months. She said she had gone to the doctor and he told her that if she didn’t find some joy in her life, she would die. My heart ached.
“We are so thankful to have you here, Carla,” I assured her.
She shared more but soon lunchtime came and she moved along to help with all the tasks. I sat and talked with the kids and the other volunteers, and all the while her story lingered in my mind. 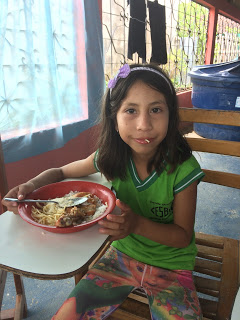 Carla\’s daughter, Rafaela
That evening, Rosa and I sat down along with Bea, and Rosa delved deeper into the story.
“The woman she worked for beat her. Her employer\’s children would beat her, too,” she shared. I could tell this was heavy for her to speak. “If there wasn’t enough food to eat at lunch, Carla would go hungry or they would give her rotten food. She worked six days a week, all day. They paid her $120 reales (Brazilian currency) a month (**that’s the equivalent of $37 US).” I grimaced as she shared more details.
Again I felt confused. Because the Carla I’ve always seen maintained a smile on her face. She cared for her children with the little she had. I would’ve never guessed the extent of her suffering.
“One day she came to me and asked if she could work at Grace House. If maybe we would have a job for her. Because she thought her employers might be paying her unfairly.”
Carla can’t read. And she doesn’t know the difference between a 10 Real bill and a 100 Real bill. When she finally opened up with Rosa back in February about how they were treating her (for years now), Rosa wrote me to see if there was a possibility to employ her to help at the house.
We didn’t know all of these details at the time, but we said yes. We don’t have the funding, but we do know that Carla and her three children have been special to us for years now and it was no coicidence. 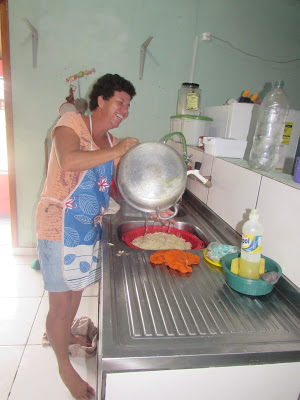 When Carla received her first month’s pay of $500 reales, she told Rosa she wanted to buy a few things. Rosa offered to take her to the grocery store. When she would ask if she had enough money to buy a certain item, Rosa would say yes, because she had plenty. This happened so many times that Carla finally said, “Rosa, I don’t think I can get all of this! They’re going to think we’re stealing!”
Turns out, most of the shops in town were taking advantage of Carla’s inability to decipher money value and they would overcharge her. She typically walked away with a few kilos of rice, noodles, and maybe a chicken. Rosa reassured her she had sufficient funds and she left that day with enough food for her and her kids for the first time in her life. She even had money left over.
“Rosa, could I buy some shampoo?” she asked as they were leaving. “My employer told me that people from my conditions don’t buy those things. But I’d really like to if I have the money.”
I could feel the anger building in my heart towards this employer. How?! Why?! Rosa continued.
“She also said that she really wanted a table with four chairs and a dish cabinet. She didn’t have those things and her employer had cheated her out of the money she received from the government for caring for her kids.”
Her employer would get the money out for her each month and was supposed to be \”saving\” it for her. What should have been over $10,000 Reales (over $3,000US) in savings over the years turned out to be $1,400 Reales (only $445US). With this money, however, Rosa was able to take her to buy those items for her home.
“She was like a child on Christmas,” Rosa said, laughing and smiling. “You’ve never seen a grown woman so happy. She just kept saying, ‘Are you sure, Rosa? Are you sure I have enough?’”
My heart was full of so many emotions. Anger at her abusers. Joy at her new found freedom. Thankfulness that God would allow us to invest in her life in this way. Uncertainty about how we could maintain her salary on the little funds that come in each month. Faith that God would provide.
That’s about the time the hardest part of the story hit. Her employer was selling her for sexual favors to a married man. My heart felt like it dropped to the pit of my stomach. This sweet lady, probably around my age, though looking much older, was being verbally, physically, AND sexually abused every single day. And she told no one because to her it was “normal” life.
Jesus, be near.
I wanted to go and find this employer and give her the justice she deserved. I wanted to report her for these atrocities and let all the world know the heinous things she had done to this poor woman. How she had taken advantage of her ignorance and lack of education. How she had beaten her down physically and verbally. I was enraged.
But I knew there is no justice to be found in this town. That this story repeats over and over and over again on these streets, with these kids and with these vulnerable women and even men. I knew that it would fall on deaf ears.
Instead I could feel the Spirit telling me to rest here. In this place of knowing that this ONE has been rescued. That freedom has been given to this ONE. That her children now have a chance to know Jesus. That she herself gets to experience His love and compassion every day and have the life-giving access to a community of Believers who love her sincerely. That her oppressors will no longer oppress. And that one day Justice will come.
About that time I heard her voice through the wall in Rosa\’s room where we were talking, “I’m heading out Rosa!”
Rosa’s face lit up and she called her in. Carla had that beautiful smile from ear to ear and proudly walked in with her backpack and dressed in her school uniform. Rosa had enrolled her in the night school so that she can learn to read, write, and do basic math.
“I hope my kids will see me going to school and be challenged to work hard. They need an education. I keep telling them,” she said to me.
“I think they’ll see that, Carla,” I assured her. \”I think they already do.\” 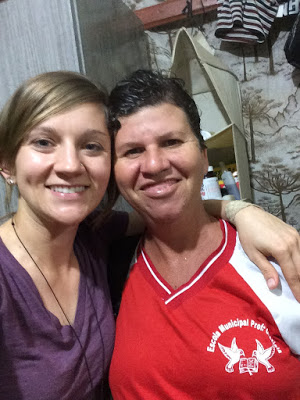 Carla\’s story is not unique. Many employers in this region take advantage of their employees because there is not a system in place to stop them. But we, as Christ followers, can make a difference. We can build relationships with them, let them know we are trustworthy. Care for their children. Love them. Feed them. Clothe them. Be Jesus to them.
And one day they may have the courage to speak up about their situation.
Please pray for Carla and her three children, Carine, Rafael, and Rafaela. Pray for them to know Jesus more. To seek Him, trust Him, serve Him. Pray for wisdom and resources as we invest as a Body of Believers in families like Carla\’s. We need people to partner with us in prayer and giving.
For more information, visit our website at www.onthebeautifuljourney.com.