I opened the refrigerator a couple of days ago to get some water. I pulled out the pitcher and there was less than an ounce sloshing around in the bottom. I caught myself as I started to say, \”Uh! Who didn\’t fill up the pitcher??\”

Really? Who didn\’t fill up the water pitcher that purifies the clean water that flows from the tap every time I turn the handle?

I was surprised at myself considering I had just spent 10 days in a place where clean water is scarce and water-borne illness is rampant. A place where people not only drink dirty water, they die from it.

My mind went immediately back to the Sunday morning we walked up into the tribe to receive word that the night before an infant had died.

At first the details were unclear. We knew that the child had been dehydrated but that was about it. Then we found out that our friend and photojournalist Rachel had been invited to attend the funeral. To our knowledge, she is the first \”outsider\” who has been asked to attend this intimate ceremony. Her experience gave us a unique look into the culture and a shocking reality of their need for the Truth.

Rachel was able to gather some details about the child\’s days before his death.

This particular culture is very spiritual and they believe there are good spirits and evil spirits. When this child become ill, they believed that an evil spirit had come upon him. He had diarrhea and desperately needed water for hydration. The parents chose not to give him water, believing that was a source of evil spirits.

Where would this thinking come from? Why would they associate something so vital with evil?

Keep in mind we are talking about a place where the only source of water is a river that is filled with bacteria and a people with no way to purify it. They drink it because it\’s all they have and it\’s all they know. Obviously drinking dirty water leads to illness. So this tribe is accustomed to seeing people become ill and die from drinking water. Unable to make the connection between hygiene and illness, myth and circumstance have led them to the belief that evil spirits live in the water and come upon a person at their own discretion.

So was this case with this child.

We were told last year that the leading cause of death in this region is dehydration caused by diarrhea. That tells us that this is no isolated case. It also reiterates the importance of what we had come to do: give clean water and through that share the Living Water.

(SIDE NOTE: Some argue against meeting physical needs before spirtual. Those people have never seen first hand tragedies like this and they\’ve never read the New Testament. A major part of Jesus Christ\’s ministry was healing the sick. Besides, it\’s really hard to share the Gospel with someon who just died of dehydration.)

When this happened, the team had not yet begun construction of the water purification system, but it gave even greater motivation for them to get in and get the job done. The system was installed in the home of a missionary by the name of Jhon. Jhon is one of the godliest, most humble people I have ever met. Time wouldn\’t permit me to share of his giving heart and servant spirit but I\’ll suffice it to say that God is using this man in a great way to reach this village with the true Living Water.

The reason it was installed in his home rather than a central location in the village is two fold:

1) Because the people don\’t recognize or understand the value of clean water, it\’s unlikely that they would care for and maintain the water system adequately at least until they are taught the importance.

2) The people are very relational, meaning they highly value personal communication and family. By installing the filtration system at the home of the missionary, the people will have to come through Jhon to get clean water and therefore will need to communicate with and build a relationship with him. THIS IS KEY to reaching this people group!

Below are some photos from the funeral taken by Rachel. As you look at them, of course thank God for His blessings, but also ask Him what you can do and what sacrifices you can make to bring truth to these tribes.

A father watches his older brother build a coffin for the child who died of dehydration during the night.

Family members surround a baby boy during the wake.

A baby lay surrounded by candles at a wake. He died of dehydration.

Iranda mourns the loss of her child before walking to the cemetery.

Family members carry the coffin to the cemetery on top of a mountain.

Missionary Jhon scoops dirt out of the grave with a plate.

A father says good-bye to his baby son. It is very uncommon for men in this tribe to show such emotion. 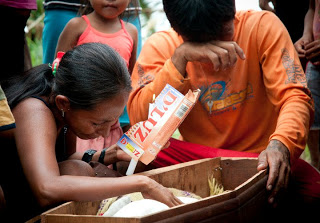 Iranda and her husband weep before burying their oldest child. 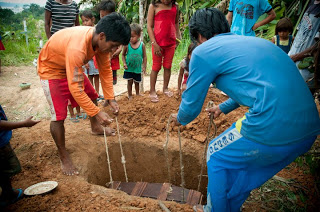 The father and his brother lower the casket into the grave. 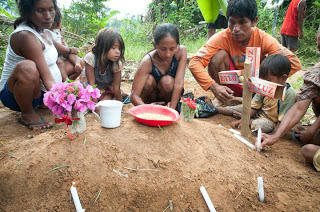 Family surround the grave and light candles before saying a final goodbye. 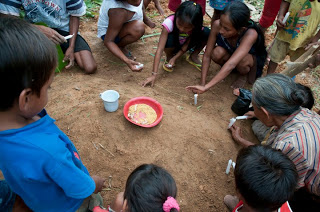 A bowl of fish and farinha sit on a grave of the recently buried child. The families leave things associated with their loved one\’s life with the belief that they may need them in the afterlife.

One thought on “Dying for Living Water”